On Sunday, 27th June, Glenn, Gregory and I went to the Leigh-on-Sea Folk Festival - see
http://www.oldleigh.com/folkfestival.html.

It proved to be a lovely day out. Folk singing and dancing was going on all day, and the weather was wonderful as well - really hot (well, bit too hot, but shouldn't complain).

England were playing against Germany in the World Cup in the afternoon though of course, so Glenn and Gregory insisted in going off to the pub to watch it. Still, while it was going on, I went off and had a nice cup of tea in a cafe and got talking to 2 ladies who turned out to be librarians, who had cycled from London to the event - how about that for a coincidence. I was sitting there reading through some draft work of mine, and making some notes. They were curious about what I was doing, and that led to the conversation!

I even went for a paddle, participated in a country dance, and bumped into a friend. Oh yes - and there were some people there performing Salsa dancing, so Glenn and Gregory could see what that was all about. Their favourite dance though was the Flamenco dancing - very pretty.

We found out about it all, as we wanted to see the Kittiwakes perform again. We first saw them at 'Forest Roots' - a free folk music event at our local pub and then we discovered that they were playing at this festival.

This Leigh-on-Sea event is also free - amazing. Such talent; such variety; such colour; such enthusiasm. Definitely something that we would recommend - a yearly event, on for 2 days.

And here are some photos of it all. 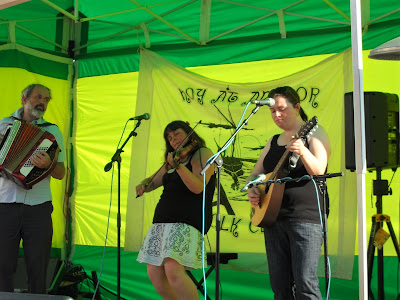 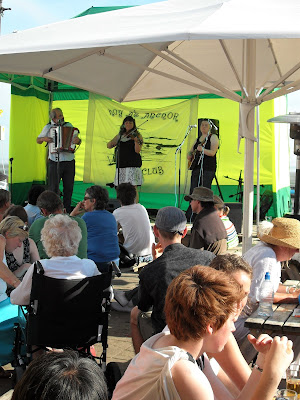 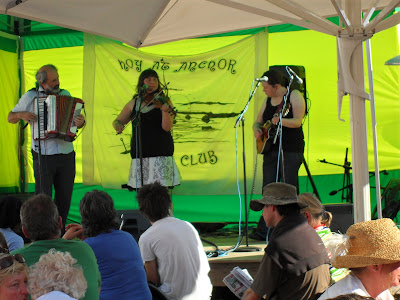 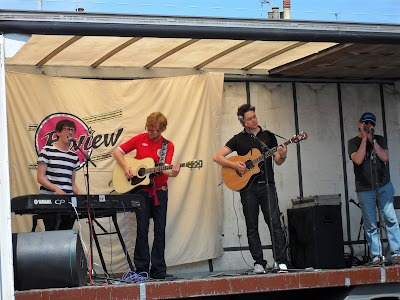 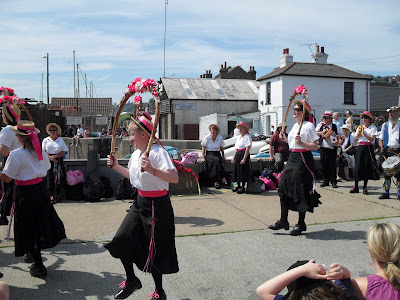 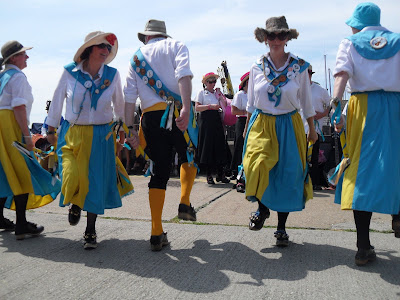 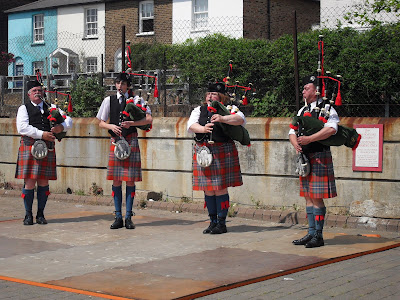 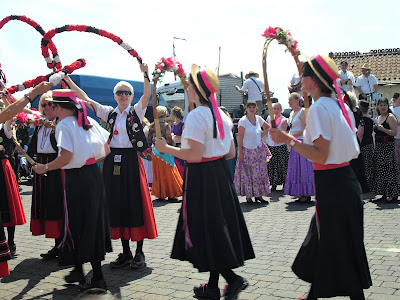 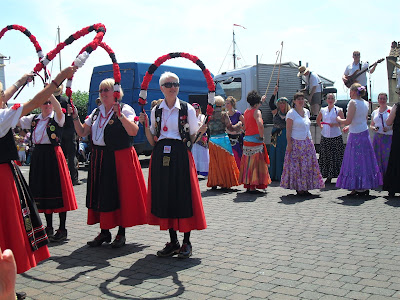 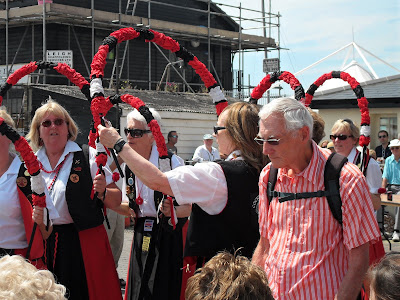 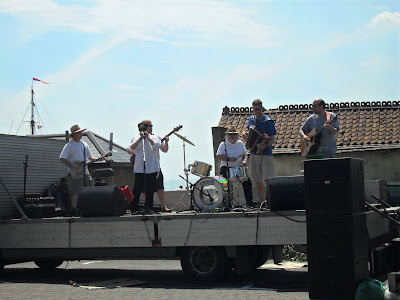 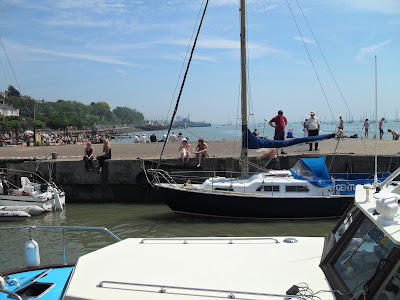 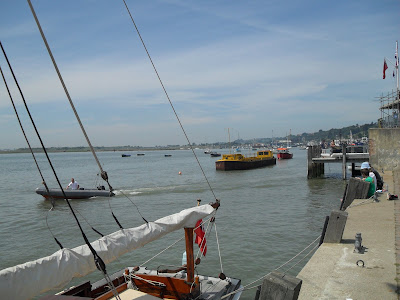 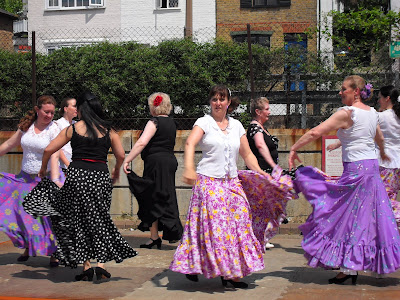 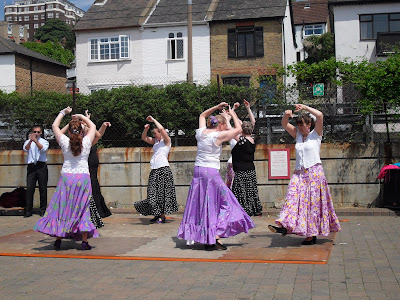 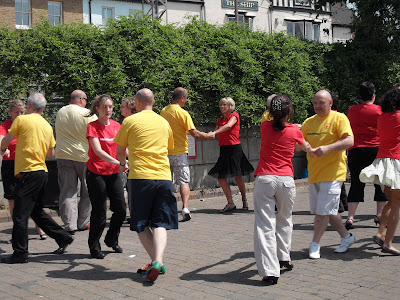 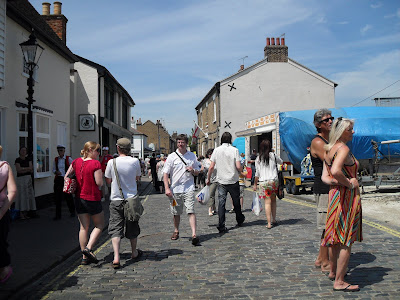 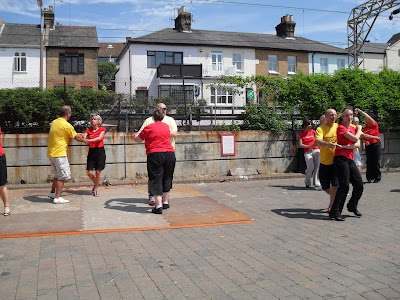 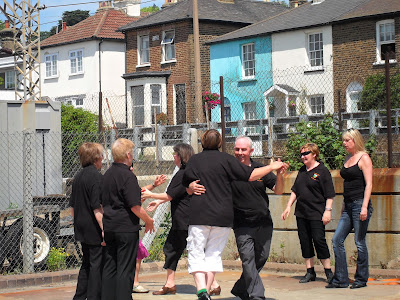 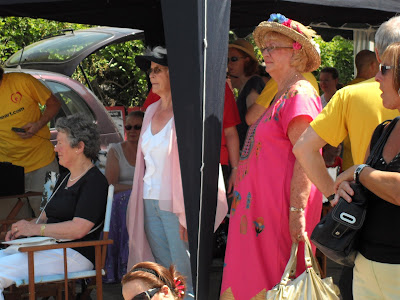 Posted by Ruth Rikowski at 05:54 No comments: 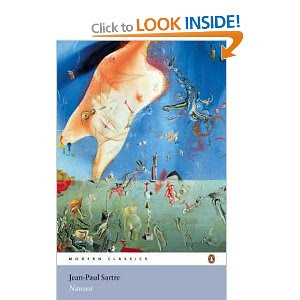 For various complex reasons I decided to read Jean-Paul Sartre's novel, 'Nausea' (Penguin Classics, 1963) and found it to, indeed, be a very sickening read!

In his Introduction, James Wood, who has been Chief Literary Critic fo the Guardian and editor at the New Republic, in Washington, DC had this to say about Nausea. It:

"...is one of the few books devoted to the logical exploration of a world without meaning. It is a philosophical novel which, if it does not quite propose philosophical arguments in the formal sense, discusses and dramatizes them...it is one of these books...which becomes the document of its own making....in such books, the writer-narrator talks about writing, and exhorts himself to write a great, solving work; only slowly do we realize that we are reading that very work." (p. vii).

So, the narrator, Antoine Roquentin in the book is himself writing a book. Even so, he lacks any real purpose and direction in his life; and walks around in a state of sickening confusion. He frequently visits the library and the art gallery and talks to the Autodidact. As James Wood says:

"He goes for walks in the town; watches his solidly bourgeois fellow-citizens; writes his book; goes to the library; has occasional encounters with a man he has nick-named the Autodidact; thinks about his former love, Anny, and so on." (p. viii)

Whilst writing this book Sartre (as an existentialist) believed that we were truly free and could make free and sensible choices. Roquentin is left with the responsibility of trying to implement this; and he wasn't doing it all that successfully in many ways. Although he did write the book of course, and that was a big deal. Writing it must have really liberated Sartre, I think, and enabled him to move on.

Sartre was only a young man (33 years old) when he wrote Nausea and this fact, in itself, probably tells us quite a lot. I think that he was trying to sort out and make sense of, many of his own thought processes. However, in the process, he seemed to care nothing, or next to nothing, for his readers at all. It is very hard to engage with the book and the character; instead, one just does indeed feel sickened by it all! Perhaps, in that way, it achieved its objective anyway, although I do think it was rather self-indulgent on Sartre's part. I also think that Virginia Woolf's writing was very self-indulgent. But Sartre really changed and progressed.
Even so, Sartre certainly portrayed vividly what can happen to someone if they think in the way that Antoine Roquentin did: with no clear aims and direction; with muddled and circular thinking and being and ways of operating; with an unwillingness to take responsibility and to engage properly with life; with a lack of interest in communicating effectively with others etc. Take this paragraph from the novel, for example:

"My thought is me: that is why I can't stop. I exist by what I think...and I can't prevent myself from thinking. At this very moment - this is terrible - if I exist, it is because I hate existing. It is I, it is I who pull myself from the nothingness to which I aspire: hatred and disgust for existence are just so many ways of making me exist, of thrusting me into existence. Thoughts are born behind me like a feeling of giddiness, I can feel them being born behind my head...If I give way, they'll come here in front, between my eyes - and I go on giving way, the thought grows and grows and here it is, huge, filling me completely and renewing my existence." (p. 145)

And here we have something about the nausea - he is indeed, heartily sick of himself, it seems.

"The Nausea is giving me a brief respite. But I know that it will come back: it is my normal condition. Only today my body is too exhausted to stand it. Sick people too have happy weaknesses which relieve them for a few hours of the consciousness of their suffering. Now and then I give such a big yawn that tears roll down my cheeks. It is a deep, deep boredom, the deep heart of existence, the very matter I am made of. I don't let myself go, far from it; this morning I took a bath, I shaved. Only, when I think back over all those careful little actions, I can't understand how I could bring myself to perform them. They are so futile. It was my habits, probably, which performed them for me. They aren't dead, my habits, they go on bustling about, gently, insidiously weaving their webs, they wash me, dry me, dress me, like nursemaids. " (pp. 223-224).

And so it goes on and on and on.

Enough of all this sickening stuff!
Posted by Ruth Rikowski at 13:08 2 comments: 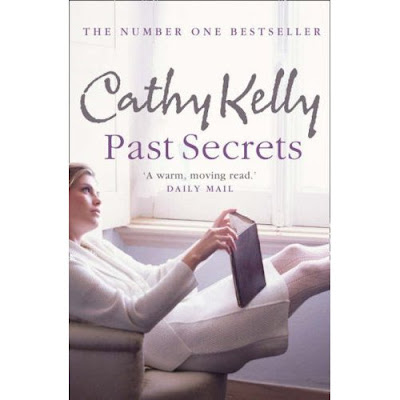 I have just finished reading 'Past Secrets' by Cathy Kelly; another very readable book. Here we have various people living in Summer Street. The three main characters are: Fayy, Maggie and Christine Devlin. Faye has a teenage daughter, Amber; she hides a secret from Amber, in regard to her birth, but regrets this when Amber goes off and does a similar impetus thing - leaving home and abandoning her studies to go off with a man in a band that she thought she was in love with. Some important messages here, about how patterns in life can be repeated, and how difficult it can be to overcome all of that - e.g. the physically abused becoming abusers themselves in later life. Then, we have Maggie who finds her husband in bed with another woman and she decides that she has to leave him. She goes back home to Summer Street to look after her sick mother where she also falls in love with another man. Interestingly, Maggie is also a librarian, and is someone that was bullied at school and was called a 'swot'. Whilst Christine is wise and forward-looking and has foresight into other people's problems and can help them to solve them. However, a man (an artist) comes back into her life, but now she is married and settled so that complicates things for her. All ends quite happily though; Christine's marriage remains strong and Amber realises that her boyfriend is no good, and comes back home and embraces her mother. And Maggie decides to move in with her boyfriend Ivan. An enjoyable read, which also made some good points. Maggie, for example, is sceptical about the supposed charmed and exotic life of academics and politicians. She says:
"Nobody in academia ever had any money and the only glamour resided in the feverish dreams of brilliant students who longed to star on University Challenge." (p. 421)
Posted by Ruth Rikowski at 00:44 No comments: