'Taming the Beast' by Emily Maguire 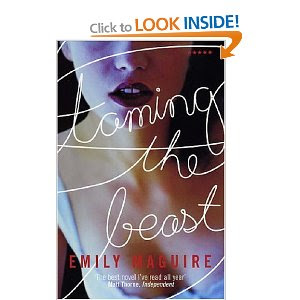 I thought this book was going to simply and clearly explore the topic of teachers taking sexual advantage of children, and how this can affect children/young teenagers later in life. So it interested me. However, I was disappointed. Don't get me wrong, it did address these issues, but in a way that I really found very distasteful. After rampant sex and declarations of love, Mr Carr, the English teacher, goes abroad with his wife, and abandons the 14 year old school girl, Sarah Clark. Sarah was a very intelligent girl and they had lots of discussions about English literature together. This bit of the book was good, and there even some interesting quotes in it from English Literature But this was no way to treat a young, vulnerable girl, even though she claimed that she knew what she was doing. When he leaves her she becomes a nymphomaniac, having sex with anyone and everyone; she becomes completely obsessed by it all. She also smokes pot, and lives a hedonistic life in general (although does also continue with her studying). Finally, he returns having divorced his wife, and they get together again. But their love is always on the verge of destroying them, especially when the abusing, violent side starts to take a hold, and they draw blood from each other. There are some very positive reviews of the book on amazon, and on the front cover there is a quote from Matt Thorne, of the Independent saying that it was 'The best novel I've read all year.' It is well-written, it has to be said, and it kept me engaged to the end, but I also thought it really was a very sickening book and I wasn't sure whether I really wanted to continue reading it (even though I did). It is not a book I would recommend, but I decided to blog it - don't always have to be writing good reviews!
Posted by Ruth Rikowski at 02:02 No comments:

'Laceys of Liverpool' by Maureen Lee 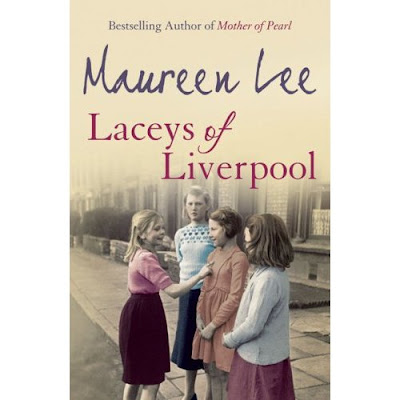 This was an enjoyable read. It centred around 2 sister-in-laws - Alice Lacey and Cora Lacey. They both give birth to sons, on a chaotic night in the height of the war, in Liverpool in 1940. Alice was married to John Lacey and Cora was married to Billy Lacey. Alice's son was called Cormac and Cora's was called Maurice.
But for some reason, Cora was always jealous of Alice; Alice had indeed lived a better, more honourable life than Cora. But Cora seemed to have her hang-ups. Cora wanted John rather than Billy, and thought she'd got lumbered with second best. But then John is seriously disfigured in the war; he felt ashamed and did not see how Alice could ever still be attracted to him, with his face looking like that. She tried and tried to convince him otherwise, telling him that she still loved him, but he wouldn't/couldn't believe her. He became very jealous and possessive. She reacted by wanting to manage a hairdressers. Cora lent her some money to help her, but Alice did not realise when she signed the agreement (she was very uneducated and not very literate) that this would mean that Cora would have a share of the profits for ever more. Cora had deceived her.
Meanwhile, John ends up going off with a one-time, prostitute called Clare who had a harelip -he somehow thought they would be well-matched. She ended up having his children, and he lived a double-life. When Alice finally found out she was obviously devastated, and John moved out permanently. John then encouraged Clare to have an operation; she looked so much better after that, but then he became insecure and jealous, just as he had done with Alice. The whole thing was beginning to seem impossible. In the end, Clare walks out on him. She didn't want him doing the same thing to her that he did to Alice.
He goes back to Alice, but she won't have him. He goes to see Cora; she is delighted. She thought that she had finally hooked him; they have sex (although he was too drunk to know what he was doing). He is very down; he accidentally sets fire to the house, and dies. Cora is devastated; having finally got him, so she thought and then lost him in such a short space of time. She also at the same time confided in him that she had, kind of, murdered two of her aunts.
Cora is later in trouble and Alice offers her a cleaning job in one of her 3 hairdressing salons -yes, the business thrived and grew. Alice is always trying to do right by Cora, even though Cora always seems to want to do harm to Alice.
Alice has 4 children; in the end, the 4 children are fed-up with Cora's antics, and manage to find a way to stop Alice from having to pay all this money to Cora. One of Alice's children manage to get hold of the agreement, and tear it up in front of Cora's face.
As for Cormac and Maurice, Cormac is becoming very successful - wins scholarships and studies at Cambridge. Meanwhile, Maurice, tragically, on the other hand, ends up in prison. His mother used to beat him with a cane, and then love and cuddle him - he grew up very confused.
Cora seeing Cormac doing so well, is jealous once again. She tells him that she swapped the babies at birth, and that Cormac is actually her son, and Maurice is Alice's. Cormac is devastated. He doesn't want Cora to be his mother; he doesn't want it at all. He loves Alice, but can no longer call her 'mum'. He drops out of university; forms a music group and is on the road, making music and smoking pot etc. Then, it later seems that Cora was lying about this all along anyway.
Meanwhile, Cormac comes home after a while, with a pregnant girl. Maurice falls in love with her, and takes her from Cormac. Cormac doesn't mind; he thinks that's fair enough, as he got the better woman to bring him up. He eventually marries someone else.
Alice's children have children; the Lacey family grows. Towards the end of the book, 4 members of the family are pregnant. And in the closing pages, both Alice and Cora find some peace. Cora seems to realise that she has not treated Alice right over the years (as opposed to thinking that she was always the one that was hard done by, that kept coming out worse off), and Neil, the man that Alice loved after it went wrong with John, returns.
Posted by Ruth Rikowski at 05:01 No comments: 'Going Dutch' by Katie Fforde proved to be quite an interesting read, although I did not enjoy it as much as other books of Katie Fforde that I have read recently. This novel is set around life on a barge. When Jo Edwards husband trades her in for a younger model, she decides to go and live on a barge. Meanwhile, Dora Hamilton decides that she cannot go through with her wedding (to her childhoold sweetheart). So she takes up the offer and suggestion of her friend Kate and goes to live on the Three Sisters barge with Jo (Kate's mother). They then find they go travelling around on the barge quite a lot (which was not something that they had originally intended to do) and get to know various people. At one point, a man goes overboard, for example, and has to be rescued. The novel spends some time exploring all this barge life, so the book will particularly appeal to those that are thinking of starting up a barge life, I think. Then, two men come to feature in their lives - Marcus for Jo and Tom for Dora.
Posted by Ruth Rikowski at 02:06 No comments: