Our neighbours organised a wonderful picnic last Sunday, 18th July 2010, through the Eden Project - see
http://www.thebiglunch.com/map/event.php?id=8a41c1a62cbdacdd672a05cca133d028.
The idea is that local communities are all over the country organise their own picnics and get-togethers on a particular day, once a year - it is a wonderful way of bringing people together. It is is also ecology-based.

Our neighours organised the event on Wanstead Flats, and there were about 140 people there altogether (both adults and children). Our son Victor played acoustic guitar and sang and others joined in. This included songs for children, such as 'Twinkle, Twinkle, Little Star' and country songs. The neighbours that organised it all and invited Victor to play, said that Victor's playing was the highlight for them; that was a lovely surprise for us. Another neighbour of ours, who also composes, and has some material on MySpace, under the name of 'Arthur Dust' was also there, and Victor and him played together a little. The weather was wonderful, there was lots to eat, and in addition there were various games going on, such as the egg and spoon race.

All in all, it was a great day. So, many thanks to our neighbours for organising all of this.

And here are some photos of the whole event. 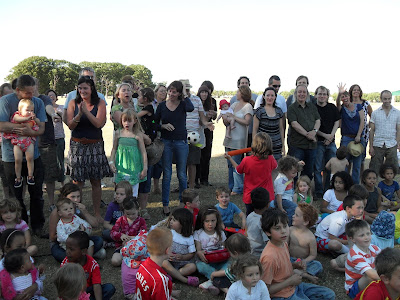 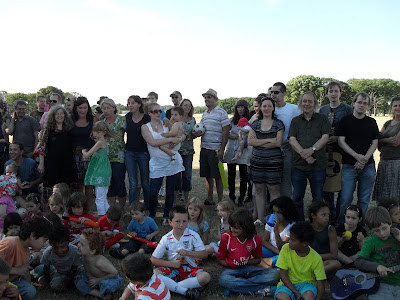 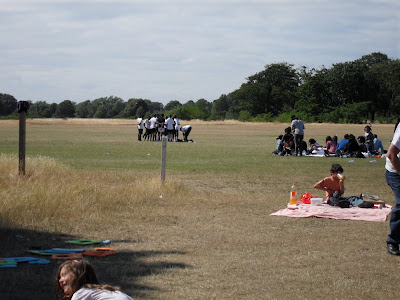 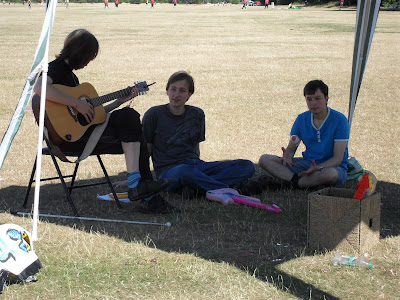 Posted by Ruth Rikowski at 03:47 No comments:

We are very fortunate in that at the Forest Gate Hotel, which is a pub that is just around the corner from where we live, on the last Friday of every month, we are treated to a free evening of country, folk and blues music. The events includes a main act, plus the resident Flats Family Band and various guests and surprise musicians. The events are called Forest Roots. For more information about the events and/or if you want to perform, contact forestroots@gmail.com.

At the next one, which is this Friday, 23rd July, our son, Victor Rikowksi, will be playing a couple of numbers, which will include one of his own compositions.

Also, Victor’s PowerPoint story (in 6 parts), The Ockress, can be found at: http://www.theockress.com

Acoustica are the headline band at Forest Roots this Friday. They play a varied selection of Irish folk and modern acoustic music. There will also be the resident Flats Family band, and various other guest and surprise musicians, including a couple of songs from the Forest Voices Choir, which I am a member of.
Jenny Beeching runs both Forest Voices and Forest Roots.

So come along to Forest Roots on Friday, 23rd July!

Free entry (with a whip-round)
Posted by Ruth Rikowski at 03:13

The Forest Gate Carnival, a yearly event which takes place about 5 minutes from our home took place a couple of weeks ago (on 10th July 2010). It was a lovely, hot and sunny day. There were plenty of stalls, people, singing and dancing. The choir that I am in, Forest Voices sang a few songs, including singing some songs with Godwin Road School Choir (see first picture below); all led by Jenny Beeching. All in all, it was a very enjoyable event. There was even a Tea Dance at the church at the top of the road. 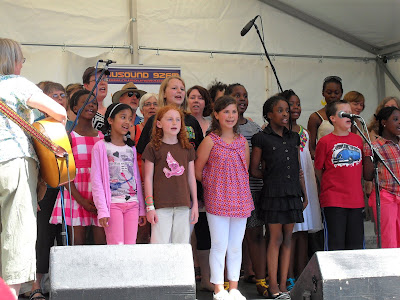 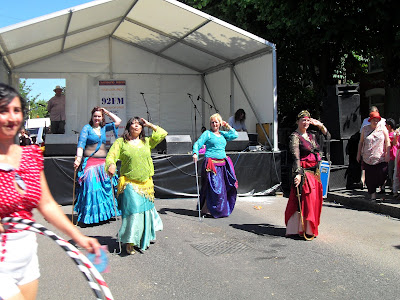 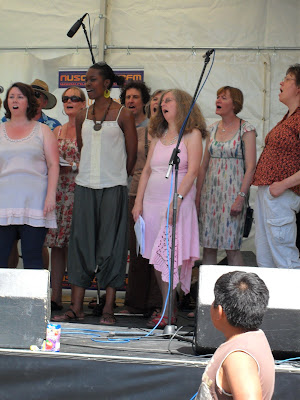 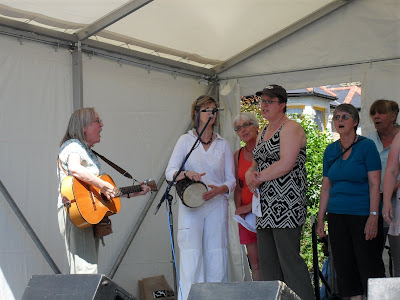 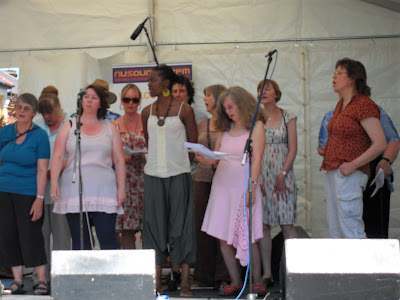 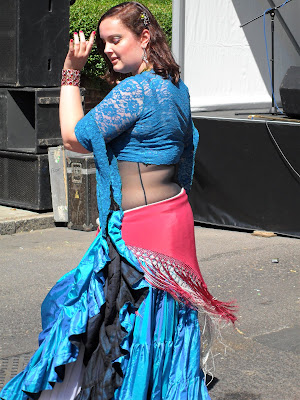 Posted by Ruth Rikowski at 00:08 No comments:

I wanted a bit of light relief from Sartre for a while, so decided to read 'Highland Fling' by Katie Fforde. It proved to be a pleasant read.

Jenny Porter, a 'Virtual Assistant' goes off to Scotland to sort out a failing mill for one of her clients. When she arrives she is more determined than ever to save it. But she is very attracted to Ross Grant, which doesn't help because Dalmain Mill owes him a lot of money. Also, Lady Dalmain is domineering and over-powering, to such an extent that her son Philip walks out on her and her mill.

Anyway, in the end, Jenny (moving on from Henry) and Ross come together (they just can't resist each other) and Ross says that he will do all that he can to try to save the mill. So, everyone ends up reasonably happy.
Posted by Ruth Rikowski at 14:23 No comments:

'The Age of Reason' by Jean-Paul Sartre 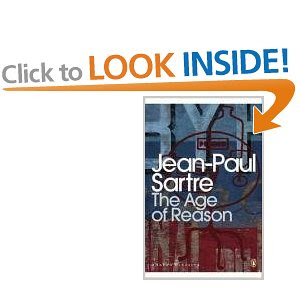 Next, I decided to read Jean-Paul Sartre's trilogy, 'The Roads to Freedom'. The BBC did a brilliant serialisation of this years ago, and although it had a very profound effect on me, I never actually got to read the books. I decided that it was time to rectify that. The first of the three books is entitled 'The Age of Reason',(Penguin, London, 1961; originally published in hardback in 1945), and so obviously, that is where I began.

The development of Sartre's thinking, the sophistication of his novel-writing is very marked. 'The Age of Reason' is just such a better and more engaging read than 'Nausea' (and he wrote this book only just 7 years after writing 'Nausea'). Philip Kerr is certainly praise-worthy of the book, saying "For my money...the greatest novel of the post-war period". Well, that was something of an exaggeration, in my view, but still it was a good book. And of course, what is so important and special about Sartre's work is that he wrote both non-fiction and fiction, and decided presumably, that some of his philosophical ideas and messages could be conveyed more effectively (or at least the contradictions could be expressed better) through the novel than through non-fiction writing. A shame that Nietzsche did not arrive at the same conclusion; the world would have been better off for that.

The big philosophical issue that Sartre addresses in this book, involves his wish and aim to somehow marry up Existentialism with Marxism. Not that he does marry it up in the book, but this just, in itself, illustrates how difficult it is to do this. Indeed, perhaps, it is impossible. Which is precisely why the topic had to be addressed in a novel. A good non-fiction, academic and worthy work requires consistency of thought; now that is very difficult achieve, if not impossible, with this topic. But never-the-less the topic is of earth-shattering importance, in my view. I am becoming very close to agreeing with Sartre here, although I started off more clearly from the Marxist perspective, whereas Sartre started from the existentialist perspective. (although, in another sense, I guess that many of us, when growing up in particular, crave for freedom in some way).

Anyway, to turn to the plot. The main character in the book, Mathieu Delarue, is living an existential-type of existence. But within this, his long-term partner Marcelle falls pregnant. Having the baby would disrupt Mathieu's life, and indeed, the free, existential life that he wants to continue to live, so he wants her to have an abortion. But Mathieu can't find the necessary cash for it. Neither is Marcelle necessarily 100% happy about having an abortion anyway. Somewhat ironically, Daniel, the gay character in the book, tries to talk her out of it, and even offers to marry her so that she can have the baby. Then Mathieu thinks that perhaps he should marry her himself, even though the person that he is actually in love with is Ivich.

Mathieu is a philosophy teacher, and the whole book is set around just 2 days, with Mathieu walking about, going into the cafes and bars of Montparnasse, talking to friends on various topics whilst also trying to obtain the money. His friends, for example, think that he wants to be free:

"Only, he wants to be free, just as other people want a collection of stamps. Freedom, this is his secret garden: a little scheme with himself as sole accomplice...An idle, unresponsive fellow, rather chimerical, but ultimately quite sensible, who has dexterously constructed an undistinguised but solid happiness upon a basis of inertia, and justified himself from time to time on the highest moral grounds. Is that what I am?", asks Mathieu. (p. 49)

Whilst all this is going on he ia also approached and asked if he would like to join the Communist Party. His instinct tells him 'no', although he does consider it, but then rejects it. It would inhibit his freedom too much (and this is where the Existentialist/Marxist dilemma is addressed). Here are some of Mathieu's thoughts on the matter:

"I refused because I want to remain free: that's what I can say. And I can also say - I got the wind up. I like my green curtains, I like to take the air in the evening on my balcony, and I don't want any change. I enjoy railing against capitalism, and I don't want it suppressed, because I should no longer have any reasons for so doing. I enjoy feeling fastidious and aloof. I enjoy saying no, always no, and I should be afraid of any attempt to construct a finally habitable world, because I should merely have to say - Yes, and act like other people. From above or below: who would decide?" (p. 124)

Then, a bit later a few more thoughts on the matter, this time from Mathieu's friend, Boris:

"...in the philosophy class there had been a a good deal of lively interest in Communism, and Mathieu had evaded the issue by explaining what freedom was. Boris had promptly understood: the individual's duty is to do what he wants to do, to think whatever he likes, to be accountable to no one but himself, to challenge very idea and every person. Boris had constructed his life on this basis, and he kept himself conscientiously free: indeed, he always challenged everyone, excepting Mathieu and Illich: that would have been futile, for they were above criticism. As to freedom, there was no sense in speculating on its nature, because in that case one was then no longer free." (p.138)

Sartre led much of his personal life in a free, existentialist-type of way, and indeed, had many lovers, and was also deceitful in the process. And of course, living such a way can lead to one hitting up against many and various problems, as well as probably hurting various people in the process. The existentialist is supposed to be responsible for their actions, but all that is very difficult of course. And so we run up against these types of problems. Marxism, on one level can seem to overcome some of them, not on another level, I don't think it can. Still, some of these issues can be addressed in fiction as I say, so that's great.

Finally, Mathieu realises that he has entered 'The Age of Reason'.
Posted by Ruth Rikowski at 00:04 2 comments: