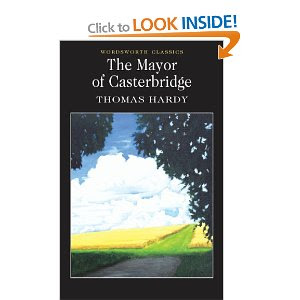 'The Mayor of Casterbridge' and 'Jude the Obscure' by Thomas Hardy


I have always loved Thomas Hardy; the way he writes, his style of writing, the wonderful countryside, the beauty of Wessex, the characters and the characterisations etc., even though, he is a determinist and such awful things happen to so many good, albeit flawed human beings. Things just to be forever conspiring against many of the main characters in his novels (such as for The Mayor of Casterbridge, Michael Henchard, for 'Jude' in 'Jude the Obscure' and for Tess, in 'Tess of the D'Ubervilles); and this happens, no matter how hard they try and how good they aim to be. It all seems so unfair and unjust. But clearly, Hardy must have felt quite passionately that this is how life can often be in reality, and particularly for certain people, (and indeed, he is certainly right on that score, I think!). Many of us have suffered in this way (although Hardy is very extreme about it, it has to be said). Society can be very cruel. However, personally, I do like to try to look on the bright side, and to somehow think and hope that things will come good in the end. Well, I have to really, for my own survival. I couldn't carry on living from day to day otherwise!


Anyway, re-reading both 'The Mayor of Casterbridge' and 'Jude the Obscure' recently, I felt this even more passionately. In fact, I actually began to find the whole process of reading the books very draining; it was actually taking it out of me. The whole atmosphere, the whole way in which Hardy writes, leads one to think that the main characters are doomed. No matter how hard they try, one knows that in the end, they will lose out; that more bad things will happen to them rather than good, and that the bad things will triumph over the good. So, although I still found the books very enticing, I was not quite so sure that I always liked the feeling they were giving me - a feeling which when I first read the books, many years ago now, I actually felt quite OK with. In fact, I loved the feeling in many ways. I felt at home; I loved the sense of community that they engendered. But on the other hand, this time around, I found the way in which everything that the characters touched, how so many people that they associated with somehow seemed to end up being bad news for them, doing them harm in one way or another, was all very draining. This shows how we can change over time, I guess.

Also, the endings in both of the books are so terribly tragic (as is also the case in 'Tess of the D'Ubervilles' of course). Both Jude and Michael die comparatively young; they both die with more or less nothing; and all that after having tried to live decent (albeit not perfect) lives! Michael could, for example, have killed his good friend, Donald Farfrae, the person that he was so kind to and nurtured, who then in various ways started to take everything that Michael had. This included Donald becoming the Mayor of Casterbridge himself and marrying the 2 women that Michael loved; Lucetta and his daughter, Elizabeth-Jane; even though all this was not done through evil, malicious intentions by Donald. Anyway, Michael chose not to kill Donald of course. He also gave the love letters back to his one-time lover, Lucetta Templeman - letters that if discovered would have destroyed her reputation. Michael still wanted to marry her - but no, she decided to marry Donald. It all starts to go wrong, of course, from the day that Michael, in a drunken state, mistakenly sold his wife; and no matter how much good he tried to do, such as becoming the Mayor of Casterbridge itself, and trying to do some good for the people in the Casterbridge community, the odds are always stacked against him; fate had other plans for him.

And look at how tragic his final words are:
" 'Michael Henchard's Will'
That Elizabeth-Jane Farfrae be not told my death, or made to grieve on account of me.
& that I be not bury'd in consecrated ground.
& that no sexton be asked to toil the bell.
& that nobody is wished to see my dead body.
& that no murners walk behind me at my funeral.
& that no flours be planted on my grave.
& that no man remember me.
To put I put my name.
Michael Henchard"
Dear oh dear!
With Jude, in 'Jude the Obscure', Jude loved books and wanted to get himself an education. He goes to Christminster (rather like Oxford). But he mistakenly married Arabella before he went, and all that comes back to haunt him as the books progresses. He cannot get into university at Christminster (it is not in his class, his league). He falls in love with his cousin Sue Bridehead in Christminster, but they never formerly 'tie the knot' (even though Arabella had long since gone). They were frightened to commit, as they had both made bad mistakes in their previous marriages, Sue marrying someone that she did not love. But after the children die (the older killing the younger two and then himself thinking that they are too burdensome for Jude and Sue), Sue decides it all happened because Jude and her have been wicked, that they should not have lived togther, and that they should return to their original marriage partners. They do; they are unhappy and in the end Jude dies, with basically nothing.
So, Michael, Jude and Tess, all well-intentioned people, trying to lead decent lives, whilst at the same time making some human mistakes on the way, die relatively young and with nothing.
All so very tragic.
Of course, these stories are all very well-known. Still, it is useful sometimes to reflect.

Hardy's style of writing though is fantastic, it has to be said, and reminds me of how Jane Austen can rephrase things in a certain very effective, enticing and beautiful way. It is a rare gift. Reading 'The Hand of Ethelberta' by Thomas Hardy also brought home to me what an art such effective writing is. This was because this book fell seriously short; as it says in the Introduction, it is indeed 'the joker in the [Hardy] pack'. Perhaps, it would have been better if it had not been published. But I suppose it at least gives us an opportunity to compare and contrast, and to help us to appreciate a good novel from a poor one. This was probably a novel that Hardy should have realised was only in draft form, and needed to be edited, rephrased, reworked in various ways. So be it. It didn't happen. But it provides a useful illustration.


This will be my last blog on the novels that I read for the foreseeable future; and indeed, blogs on 'Serendipitous Moments' in general now, will be rare. Next, I need to concentrate on my own novels; on my own writing and on my own life. I do this by forward thinking; by being optimistic; by embracing life; by connecting with certain types of people and organisations and by making certain decisions. And by thinking in the opposite way to Thomas Hardy in many ways, in fact. By believing that no matter what obstacles one may be presented with, it is possible to find positive ways through, and to come out successfully and on top. Romantic thinking perhaps, but it is how I prefer to think and to be. And for me, it has certainly brought forth good results. We do what best suits us. And so for all these reasons, my energy must be conserved, so this door will now close, and will make way for another one to open.
I hope and trust that these blogs of mine on the novels that I read have provided some interest and enjoyment. Novels have been, are, and will always continue to be a very important part of my life. And on this note, I will leave the final few words to Lizzie in Jane Austen's 'Pride and Prejudice', who says that:
"How much sooner one tires of anything than of a book!"
I could not agree more! There can, indeed, be no finer words in my book!
Posted by Ruth Rikowski at 04:28 No comments: