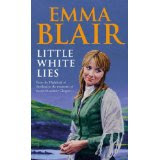 I enjoy Emma Blair books, so for relaxation decided to re-read this one - 'Little White Lies'. I read it very quickly; couldn't put it down, in fact.
It is about the antics of a family that move to Glasgow, after the father loses his job in the small town Tomintoul. Lizzie moves there with her parents, although the 2 grown-up sons do not join them. Lizzie quickly finds work as a machinist and makes friends with Pearl. We witness Lizzie growing up; her first alcoholic drink; her first boyfriend; her first sexual encounter etc. But all suddenly goes pear-shaped when she discovers that the first and only time that she has sex, she falls pregnant (whilst Jack has gone off to sea - he was too young to be tied-down, he thought - even though he was mesmerised by Lizzie). The family were really worried about the disgrace it would bring on them. So much so that the mother, Ethne, decides to make out that she is pregnant; she pads herself all out. Meanwhile, Lizzie goes to stay with her brothers, supposedly to help to care for them through a bout of sickness, whilst in fact, she has the baby. Ethne joins them then returns telling everyone in the area that the baby is hers - i.e. 'Little White Lies'. Everyone seems happy with this solution. Later Jack returns, realises he loves Lizzie and they settle down, although he is never told about the baby!
Another story running alongside this is in regard to Pearl. She marries Willie; very keen to tie the knot, only to realise what a big mistake she has made. He is always complaining, comparing her to her mother. Then, he is desperate for a child, but no joy. In the end, she does something very dramatic - has sex with Willie's friend Pete, just to try to get pregnant and please Willie. She succeeds - she falls pregnant, only to discover later that Pete and Pearl love each other. Pearl ends up going off to London to live with him, and hopefully in time, to marry him.
The final story is in regard to Doogie, the father, who can't resist the bountiful and sexy Daisy at work.; especially as at the time, Esthne is not so keen. But it is only for a short duration; then Daisy finds someone else and luckily no-one gets hurt. Doogie is also a hard worker, which probably helped him to 'get away with it all'.
Posted by Ruth Rikowski at 04:38