'The Magic Cottage' by James Herbert 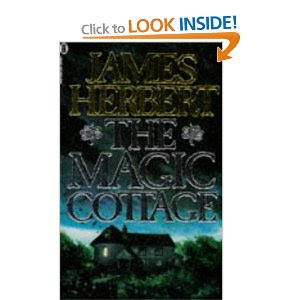 Our son, Alexander's new girlfriend, Simone, kindly lent me this book the other day, because she thought I would like it and it did prove to be an enjoyable read: 'The Magic Cottage' by James Herbert, New English Library, 1987. For some reason, I have never tried reading a James Herbert book before. But anyway, this one was quite gripping.
It is basically about this couple, Midge and Mike who buy a cottage, Gramarye, that turns out to have special magical powers. All sorts of weird things happen in the place; there are bats in the loft, for example, cracks in the building mysteriously appear, and Mike's injured arm rapidly and mysteriously heals. They then discover that there is a religious sect in the village, called the Synergists; this group start interfering in Midge and Mike's life. Then they realise it is because the Synergists want to take over and move into Gramarye, wanting to benefit from its special powers. But in the end the cottage is destroyed.
In the final page Mike and Midge are thinking of looking for and buying another cottage in the country, perhaps in the Cotswolds. But this time, not surprisingly, they are not so sure about it all!
Posted by Ruth Rikowski at 01:51