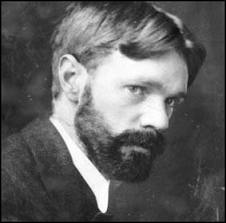 Following on from my last but two blog, about 'Women in Love' by D. H. Lawrence, I suddenly felt driven to explore all this in much more detail.


How did that happen, one might ask? What is all this about?

Well, years ago, when I was still working in the public library service, in the London Borough of Newham, we were instructed by management to clear out/chuck out a really large collection of old and specialist books. Some of them were really wonderful and were by and about interesting, worthwhile and important people. Some even had leather bindings and beautiful covers etc. I decided to 'rescue' some of these books, and we brought them home in our car. Our front room, for a while, began to look like a library itself!

Now, part of this collection was 2 volumes of D. H. Lawrence's letters edited by Harry T. Moore ('The Collected Letters of D. H. Lawrence'), William Heinemann, 1962. Glenn read them soon after we acquired them, and thought they were absolutely brilliant. He tried to persuade me to read them but I did not 'bite' the cherry at the time. I did not see how letters could be all that interesting (and I also thought, at the time, that it could be disruptive). Then, suddenly, having re-read 'Women in Love' I wanted to give them ' a go'; I wanted to read them; I wanted to find out lots more about Lawrence the person, and in particular, to make sense of this so-called 'Nietzscean influence'.

And what did I find? I was amazed. I was intoxicated; I was overcome; I was in love. It was as though, through his letters, I was talking to Lawrence himself directly. His personality comes across just so powerfully in the letters. And what a wonderful person! As Brenda Maddox says in ‘D. H. Lawrence: the story of a marriage’ (Simon & Schuster, 1994):

How could I ever have doubted him at all? - see my ‘Women in Love’ blog. I had my reasons, over the years, but still - I felt disloyal. So, a thousand apologies D. H. Lawrence! I discovered that the letters form one of the best and most comprehensive collection of letters and correspondence ever. Harry T. Moore said in the Introduction to the letters (in Vol 1) that:

“Lawrence’s letters are virtually without parallel in literature; in recent times, only those of Keats, Flaubert, Hopkins and Rilke are anywhere near as rich.” (Moore, p. xiv)

“His [Lawrence’s] imagination flowed into whatever he wrote, even casual letters.” (Sagar, p. x)

So really, given my love of Lawrence, no wonder I was so moved by them! Incidentally, these are only a selection of his letters - there are actually 7 volumes of his letters published with Cambridge University Press, 2002, edited by Keith Sagar and James T. Boulton.


I guess that is one of the advantages of becoming a major success at quite a young age and certainly in one's lifetime. Lawrence was recognised as being a genius in his early 20’s, and no-one ever really doubted it after that (although that did not stop him from getting a lot of criticism of course). So, even if people had disagreements with Lawrence, they knew he was really something, so decided to keep his letters, I guess.

Elaine Feinstein in ‘Lawrence’s Women: the intimate life of D. H. Lawrence’ (Flamingo, 1994) said that Ford Madox Hueffer, the editor of the English Review (the journal that Jessie Chambers first sent Lawrence’s work to – some poems and short stories) recognised Lawrence’s genius as soon as he read a little of his work. He saw:

“…the first paragraphs of the story ‘Odour of the Chrysanthemums’ as so clearly talented that he put the manuscript into his tray of accepted work without reading further. As was his habit, he began mentioning Lawrence as a genius he had discovered, and so it was that Lawrence’s name became known to writers like G. K. Chesterton and H. G. Wells before he himself knew that Jessie’s attempt to secure publication for him had been successful. Lawrence owed a great deal to Hueffer. To appear in a journal like the English Review, which also published such writers as Joseph Conrad, Henry James, Thomas Hardy and John Galsworthy, ensured that his work would receive attention.” (Feinstein, pp. 57-58)

Wow! Also, in connecting up with such an editor he was a lot more fortunate than I was when I started out on my writing and publication path!

Lawrence - you transformed my life! Basically, if it had not been for you I would probably never have gone to university at all. You gave me the inspiration; you gave me the confidence; you gave me the determination to make it all happen. There were other forces and influences, but when I think about it and reflect, I realise that you were the main force; the underlying and most powerful force.

Yes, there were a number of influences, but really Lawrence was the key to it all. I was fascinated to read what Frieda Lawrence (his wife) herself said about Lawrence after he died, about how much he influenced so many young people. She wrote to Professor Fay, saying:

“Many young people have come and told me how reading Lawrence has completely changed their lives. They would not say that when reading Somerset Maugham…Lawrence was trying to find a new way of life.” (Frieda Lawrence in Maddox, 1994, p. 505)

It was not Lawrence's fault that university life did not live up to my teenage romantic expectations. That is just life; the hard facts of life; and in particular, the hard facts about capitalist life, of course. Lawrence put forward/advocated a certain type of life; a certain way of living, but to actually try and live and be that way is something else. It is extremely difficult; but that still does not mean that it is not something that it is worthwhile to aim at – indeed, far from it.

But through this summer journey (and reading some 20 books on the topic in all, would you believe!), I also discovered that Lawrence had various personal problems of his own and could not always live up to his own expectations anyway. So, in one sense he was not living this 'ideal' life himself - but in reality I don't think he tried to make out that he was anyway.

That was just my misunderstanding, as well as me getting too 'hooked' into 'Women in Love' itself. 'Women in Love' was written in the early days of his relationship with Frieda. But times changed and life moved on, of course and his writing and his own thoughts also changed, developed and moved on. But I remained rather hooked on the type of life that was portrayed in ‘Women in Love’. But F. R. Leavis in ‘D. H. Lawrence: novelist’ (Chatto & Windus, 1964) thought that ‘The Rainbow’ and ‘Women in Love’ were his greatest works, so perhaps in a way, I was right. Leavis says that:

“It is The Rainbow and Women in Love that most demand attention. The need is to get recognition for the kind of major achievement they are. Together they constitute his greatest work, or perhaps it is better to say that, in their curious close relation and the separateness, they are his two greatest works.” (Leavis, p. 18)

Maddox, in addition, thought that Women in Love was his most ambitious work. And Lawrence made it clear in his letters that he also thought it was his best book. He wrote to B. W. Huebsch on 10th February 1920, saying:

Then, again, he wrote to Thomas Seltzer on 7th November 1920, saying:

“Secker intends Women in Love for February. I still think it is the best of my books.” (p. 635 in Vol. 1 of the Letters)

Although, it is possible that he might have changed his mind after having written some of his other novels; I don’t know, although I suspect not.

So, why did he not continue writing in this Women in Love way, one might ask? Was it the influence of Frieda? Would a ‘softer’ woman that helped him more practically have been better? Or was it the fault of the English and the way they treated him after writing The Rainbow and Women in Love? Or was it something else, or a combination? Who know? It is all pure speculation. And does it necessarily really matter? Lawrence produced great work – that was and is the most important thing.

“I live in hopes that Lawrence’s recognition is at last to come…I mean, his recognition for what I am convinced he is: the great creative genius of our age, and one of the greatest figures in English literature.” (Leavis, p. 317)

What I think is also very important to realise is that Lawrence was very much about ‘going for life’, and that he put this above any particular way of living – and that this was the main, the most powerful Nietzschean influence and effect, I think. Lawrence said:

And in regard to his wife Frieda, Feinstein also said that:

“Frieda had no intellectual ambitions. She simply wanted to live life more fully.”

Although Maddox was of the opinion that:

“Frieda was undisciplined but not unintellectual.” (Maddox, p. 97)

Frieda certainly read a lot and proof-read and edited some of Lawrence’s work. In particular, Frieda was very keen on Nietzsche – and in fact, this was the main way in which Lawrence was influenced by Nietzsche. I concluded through my reading that Lawrence was influenced by Nietzsche more indirectly through Frieda than through any direct reading of his own of Nietzsche’s writings. Lawrence, on the whole, preferred reading and writing literature.


In regard to Frieda Lawrence and Nietzsche, Maddox said that:

“Frieda became…devoted to Nietzsche. In later life she referred to him as ‘my old friend’ and from a Lawrence poem she took as the title of her own autobiography a Nietzschean phrase, ‘not I, but the wind’, implying that her own powerful personality was nothing but the life force that blew through her. The sisters [Frieda and Else] liked Nietzsche for the same reason that writers such as Shaw, Yeats and Wells were attracted to him: he was aphoristic, full of memorable, scientific-sounding nuggets of wisdom.” (Maddox, p. 100)

In addition, taking Nietzsche’s ideas forward, Frieda very much wanted to nurture a male genius, and so, she left her husband and 3 young children for Lawrence, in order to nurture and help this genius; as well as to live life more fully herself of course.

Anyway, Lawrence went with Frieda and produced all this genius work. These are the facts of the matter. So, let us just celebrate this and have done with the rest. That is what I have concluded. And Nietzsche played some part here (re encouraging geniuses, especially male ones and ‘going for life’), so we must celebrate Nietzsche as well. Hallelajah! The Saints be praised and all that!

There is so much more that could, should and needs to be said on this amazing topic. This is, perhaps, just the openings of my ‘D. H. Lawrence Journey’. But enough said for now; the rest can wait for another time and another day.