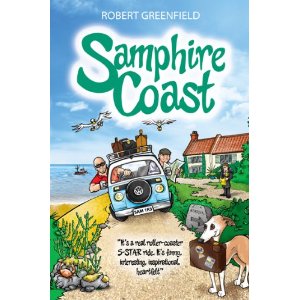 We purchased this novel when we visited Holkham Hall in Norfolk this summer. The author, Robert Greenfield was there, selling signed copies. We thought the book looked intriguing, as this was someone that had had a difficult background, now lived in Norfolk and had made a real success of his life.

Now, I have just finished reading this book and it was, indeed, a great read. It describes how this gay couple, Robert and Mike decided to set up and run a very successful Bed & Breakfast place in Thursford, Norfolk. Greenfied explains the risks they took, leaving their home and their way of life in London, and the big success they made of their B&B place. So much so, that they won various awards, and in particular, won the award for the best B&B in Britain in 2005! They worked very, very hard and always went the extra mile. They were incredibly hard-working and enthusiastic. They were real perfectionists. Greenfield also tells many stories about their different and interesting experiences and some of the people they meet, whilst running their B&B.

However, their success came at a price. Having won this major award, they felt that their personal life and space was being invaded - as the B&B place was also their home. They would also have had to kept up their incredibly high standards of course, in order to 'stay on top'. They decided that for the sake of their relationship and to protect their way of life within this, they had to sell up their B&B, whilst they were at their peak. I could understand their reasons, but still, it brought tears to my eyes...

I thought many things were amazing and wonderful about the book - e.g.

1. The style of the writing - it was very gripping and really made you want to read more.
2. It showed how one can really succeed at something if one is really determined, yet how such success can also come at a real price - there are no really safe places in capitalism.
3. It showed how much one can achieve if one has a really good relationship, but how important it is to keep that relationship strong, and not let society and people tear it apart.
4. The author's love of Norfolk came across very powerfully in the book - and it is a very special place for us too.
5. The ending was a surprise to me - right up to the end, I thought that it might have been partly a marketing exercise for the promotion of Robert and Mike's B&B - but clearly it was not.
6. How one can overcome a difficult childhood and how sometimes those that have more difficult lives end up achieving more. As Robert Greenfield says:

"Paradoxically, I have found, it often seems the people who have suffered the most adversity in their formative years, are the ones that go on to have the most outstanding, and productive lives...(p.69)

This is certainly a book I would recommend - a really fun , interesting and enjoyable read.
Posted by Ruth Rikowski at 20:32