Ian Parker and his 'Revolution in Psychology' 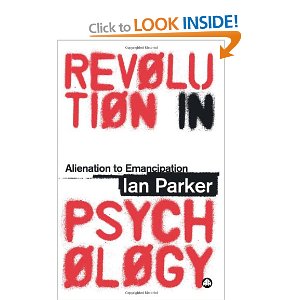 We were shocked to discover that Ian Parker, a Professor of Psychology at Mancester Metropolitan University, has been suspended from work. This followed on from Ian Parker raising concerns within the university about the problem of secrecy and control in the department where he works.

Now, why this is so particularly shocking to us is because Ian Parker wrote a book that we thought was really inspiring and genuine - basically, a critique of psychology.

The book is: 'Revolution in Psychology: alienation to emancipation, Pluto Press: London, 2007.

"Psychology is important not because it is true but because it is so useful to those in power...Psychology is an increasingly powerful component of ideology, ruling ideas that endorse exploitation and sabotage struggles against oppression." (pp. 1-2)

"Psychology is indeed a fake science that abuses the public, but it calls upon forces that have come to operate deep within us as human beings who have come to be who we are so we can work and survive in capitalist society." (p. 7)

Indeed - psychology helps people to function in capitalist society, and we should not fool ourselves into thinking that it is basically anything much other than that.

We do hope that Ian Parker will soon be back doing his all-important and highly valuable work.
Posted by Ruth Rikowski at 20:56